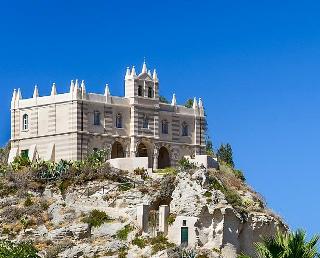 Tropea (ancient Trapeia; Τράπεια in Ancient Greek) is a municipality located within the province of Vibo Valentia, in Calabria (southern Italy).

The town is a famous bathing place, situated on a reef, in the gulf of St. Euphemia connected with the mainland by a narrow strip in the Tyrrhenian Sea, toward the south with respect to Vibo Valentiaand northward with respect to Ricadi and Capo Vaticano.

The history of Tropea begins in Roman times, when along its coast, Sextus Pompey defeated Octavius. In the south of Tropea, the Romans had built a commercial port, in the locality of Formicoli (from the name Forum of Hercules), mentioned by Pliny and Strabo.

The legend says that it was Hercules who, returning from Spain (Pillars of Hercules) stood on the Coast of Gods and made Tropea one of his ports.

Due to its peculiar position as terrace on the sea, Tropea played an important role during Roman, Norman and Aragonese times. In the surrounding areas have been found tombs dating back to theMagna Graecia period.

The Virgin Mary of Romania[edit]

In the Norman cathedral of Tropea there is a picture of Virgin Mary of Romania, of Byzantine origin, dating from around 1330.

The legend says that a boat coming from the East-Byzantine Empire (hence the name Virgin Mary of Romania) was driven into the port of Tropea by a storm. After repairing the damage, the captain tried to leave, but the ship still stayed in the harbor. That same night, the Bishop of the city, Ambrogio Cordova, dreamed of the Virgin Mary asking him to stay in Tropea and becoming its Protectress. The dream repeated itself for several nights. Eventually the bishop summoned the senior officials and the citizens, and together they went to the port to take the picture of the Virgin Mary. As soon as the painting was brought to shore the ship departed.

The Virgin Mary promised to defend the city from pestilence, earthquakes, and war, and many events that took place since then seem to attest to this.

According to tradition, the Virgin Mary appeared several times in dreams to the Bishop, warning him of an earthquake that would devastate Calabria. On the March 27, 1638, the Bishop established a penitential procession, involving all the people from Tropea. Thanks to the procession, the earthquake which struck that very day caused no harm.

The citizens of Tropea were also saved from the 1783 Calabrian earthquakes, much stronger and more tragic than the previous one, that affected the whole of Calabria. This event strengthened the devotion to the Virgin Mary of Romania, and the citizens of Tropea proclaimed her the patron of Tropea.

During World War II Tropea suffered a bombing, but the six bombs which fell on Tropea all fell into a hole and remained unexploded.

Many villages around Tropea produce a particular quality of red onion. In Italy these onions are so famous that cipolla di Tropea ("Tropea onion" or "Tropea's onion") has become an Italian synonym for all red onions.

One of the gelaterias in town, Tonino in the Corso, even makes a red onion ice cream (as well as others based on squid ink and nduja, the local spicy salami).