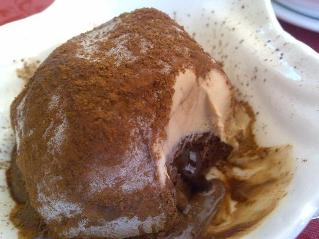 Tartufo is an Italian ice-cream dessert originating from Pizzo, Calabria. It is usually composed of two or more flavors of ice cream, often with either fruit syrup or frozen fruit — typically raspberry, strawberry or cherry — in the center. It is typically covered in a shell made of chocolate or cocoa, but cinnamon or nuts are also used.

The word "Tartufo" means "Truffle" in Italian. It is also known as "Bomba".

Ice Cream Tartufo di Pizzo.[1]
The Tartufo di Pizzo ice cream was invented in 1952 when a relative of king Victor Emannuel II came to Pizzo in honour of the celebration of an aristocratic marriage. For this occasion many guests were invited for an elaborate dinner. Unfortunately the hosts did not have enough cups to serve the guests the ice cream dessert but a clever pastry maker named Don Pippo de Maria came up with a creative solution. He invented an ice cream that did not need a cup but instead could be served on a plate. He put a small portion of hazel and a small amount of chocolate ice cream in the palm of his hand, he poured over some melted chocolate and then wrapped everything up in special paper to mould it. Wrapped up like little presents, he put the ice cream parcels back in the freezer before serving it to his guests.

Don Pippo's invention earned him immediate fame. After the aristocratic wedding Don Pippo went back to his ice cream parlour which exists to this day. A former waiter of Don Pippo named Giorgio di Iorgi took over Bar Dante in 1964. It is still there on the central piazza in Pizzo and serves the famous Tartufo ice cream according to the secret recipe of Don Pippo.

Since then Tartufo di Pizzo ice cream has become legendary. The original recipe is kept under strict guard by the De Maria descendants.

The original truffes were created just after the French revolution by French chefs and were chocolate confections made to resemble like their prized fungi cousin in the Périgord region of France. These sweet confections were given at Christmas time as gifts. Sometime during the Victorian era, the frozen truffle came about when the idea of moulding ice creams into shapes such as flowers, fruit, and other foods became popular. During recent times ice cream "truffles" or "tartufi" have regained popularity.

Tartufo is usually composed of two flavors of ice cream which are sculpted together with the hands. If there is a fruit in the middle, ice cream may be scooped out from the middle and the fruit placed inside, or fruit syrup may be used to paste the two scoops together. If its shell is chocolate, special chocolate is usually melted and either dipped or poured over the ice cream ball after being cooled to lukewarm — though they can also be rolled in the chocolate — and then frozen. If its shell is cinnamon or cocoa, it is usually rolled in cinnamon or cocoa before freezing. If it uses nuts, they are usually placed on by hand if large and rolled on if smaller. For a better shape, circular molds are sometimes used.